I was really excited to read "Death with Interruptions" by Jose Saramago.  His book "Blindness" was one of my favorites.  Unfortunately it's hard to top such a great book.


I must say that the first half of the book didn't live up to my expectations, though it was interesting and I enjoyed the premise.  It really got good when I got to the second part and death was introduced.  From that point on, I couldn't put it down.


Synopsis: On the first day of the new year, no one dies. This of course causes consternation among politicians, religious leaders, morticians, and doctors. Among the general public, on the other hand, there is initially celebration—flags are hung out on balconies, people dance in the streets. They have achieved the great goal of humanity: eternal life. Then reality hits home—families are left to care for the permanently dying, life-insurance policies become meaningless, and funeral parlors are reduced to arranging burials for pet dogs, cats, hamsters, and parrots.


Death sits in her chilly apartment, where she lives alone with scythe and filing cabinets, and contemplates her experiment: What if no one ever died again? What if she, death with a small d, became human and were to fall in love?
Posted by SleightGirl No comments:

Sometimes the best part about Christmas is the sales afterward. All of the items featured here or on sale, so get them while you can, before the prices go back up!


Here is the actual link for those of you that want to blog, Facebook, or tweet about it:

Every Friday, I put together a treasury of some of my favorite items made by other etsy sellers, post it on my blog, and call it the Friday's Favorites.


Last treasury, Stocking Stuffers (It's not too Late), had 121 views, 23 comments, 83 clicks, 7 admirers and 3 Sales! Congrats ThreeBirdNest, victoriascharms and callyfindlay!

This week I'm looking for your AFTER HOLIDAY SALES!  If you have something on sale, post the link to the item in the comments, then check back tomorrow for the Friday's Favorites.


I will be looking for items in the forums, but I always consider the blog submissions first.

I've been having a lot of auditions lately.  I remember when I used to get so nervous, and then I'd stress for days wondering if I got the job or not.


Nowadays, I've been to so many hundreds of them that they don't phase me anymore, and in fact, when I do get the job, sometimes I don't even remember auditioning for it.  There is very rarely a rejection letter in the entertainment industry, either you hear from them, or you don't.  It's usually best to forget about something once you've tried out, otherwise, you'll drive yourself crazy wondering.
Posted by SleightGirl 3 comments:

Christmas was wonderful!  We had the boyfriend's family over and I cooked my first full Christmas dinner!  The turkey turned out great...and I was worried since I'd only made one turkey before, and everything was ready almost at the same time!  Yay for planning ahead.


We opened presents, drank mulled cider, and just enjoyed everyone's company.  I couldn't have asked for a better one.


The boyfriend gave me lots of cool gifts, but my favorite one was the portrait of our fur monsters together.  He couldn't actually get them to pose together, so he had to do each one individually and digitally put them together.  It is so cute and sweet.


I hope you all had just as much fun on your day.
Posted by SleightGirl 2 comments:

Because Christmas is coming soon, the boyfriend's family is coming in and there's so much cleaning and cooking to do, this week's Friday's Favorites won't happen.


Tune in next Thursday for submissions, and next Friday for the favorites.

When I was a kid, I just loved going into my stockings. It was proof that Santa had been there. What will he leave in your stocking?


Here is the actual link for those of you that want to blog, tweet, or Facebook about it:

Every Friday, I put together a treasury of some of my favorite items made by other etsy sellers, post it on my blog and call it the Friday's Favorites!


This week, I'm looking for STOCKING STUFFERS.  These are gifts that fit into a stocking and aren't as expensive as the real gifts.  If you have any good stocking stuffers, post the link in the comments and check back tomorrow for the Friday's Favorites.


Don't have any stocking stuffers?  Feel free to nominate a friend's item and help spread the love.


I'll be looking in the forums for items as well, but I always consider the blog submissions first.

It has been awhile since I've done a book review, and I've decided to start bringing them back.


I recently finished reading for my book club, Sarah's Key by Tatiana de Rosnay.  I've read quite a few World War Two accounts both fictional and non-fictional, and this one was very poignant indeed.  I do think that I found the first part of the book more interesting than the second as you got to see both points of view of what happened from present day to the past.


Though not my favorite book of those times, this one will still get to you, right in your heart.


Synopsis: Paris, July 1942: Sarah, a ten-year-old girl, is taken with her parents by the French police as they go door to door arresting Jewish families in the middle of the night. Desperate to protect her younger brother, Sarah locks him in a bedroom cupboard—their secret hiding place—and promises to come back for him as soon as they are released.

Sixty Years Later: Sarah’s story intertwines with that of Julia Jarmond, an American journalist investigating the roundup. In her research, Julia stumbles onto a trail of secrets that link her to Sarah, and to questions about her own future.
In Sarah’s Key, Tatiana de Rosnay offers up a mesmerizing story in which a tragic past unfolds, the present is torn apart, and the future is irrevocably altered.
Posted by SleightGirl 3 comments:


I have never had a white christmas, but these light blue pieces remind me of snow and ice. I'm sure one of these pieces will be the right touch for you, as you gaze out on those icicles on the window sill.

Every Friday, I put together a treasury of some of my favorite items made by other etsy sellers, put them on my blog and call it the Friday's Favorites.


This week I'm looking for LIGHT BLUE.  If you have any light blue in your shop, post the link here in the comments, and check back tomorrow for the Friday's Favorites.


Don't have any Light Blue?  Feel free to nominate a friend's item and help spread the love.


I will be looking in the forums for items as well, but I always consider the blog submissions first.
Posted by SleightGirl 5 comments: 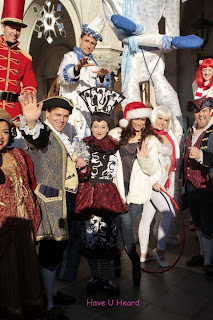 On Saturday, Karina Smirnoff came by the Venetian to check out our Winter in Venice event.  The cast from the St. Mark's Square show came out to greet her and the Christmas cast.  She seemed nice, but we didn't really get a chance to talk to her as her people whisked her away to the next photo op right afterward.


This time, I'm the one in the black and white costume standing next to her.
Posted by SleightGirl 2 comments:

Red is such a fun color to wear, especially around the holidays. It's vibrant, and it really has its own point of view. Whether it's for you or your home, maybe some of these pieces can help you make your statement.


Here's the actual link for those of you that want to blog, facebook or tweet about it:
http://www.etsy.com/treasury/NjI1NjY2NHwxMzYwMDYwNjUw/red-dy-for-the-holidays
Posted by SleightGirl No comments:

Every Friday, I put together a treasury of some of my favorite items made by other etsy artists, post it on my blog, and call it the Friday's Favorites!


This week, I'm looking for RED.  If you have any red items in your shop, post the link in the comments here, and then check back tomorrow for the Friday's Favorites.


Don't have any red?  Feel free to nominate a friend's item and help spread the love.


I will be looking in the forums for items as well, but I always consider the blog submissions first.
Posted by SleightGirl 7 comments: