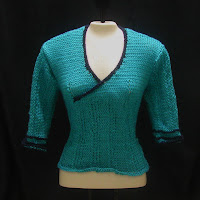 I have to take the boyfriend to the airport soon, but I have just enough time to post my newest creation! It's an Aqua 3/4 Sleeve Sweater! The waist is made in a looser lacy type of stitch to let the body breathe, and the top a tighter knit to give a little bit of warmth after the sun has set. I hope you guys like it!

I can already juggle balls...I do so at work every day, and though I'm not the best juggler, I'm not nearly as terrible as I used to be. Well, last night, the boyfriend decided that I should definitely learn to juggle clubs. For those that don't know, the clubs are the ones that look like bowling pins.

They are much harder than balls...both to juggle and when they hit you in the head...OUCH! I think I broke every single nail...Not good when your real profession has people looking at your hands. I'll have to practice a bit more with 2 clubs and hopefully I can suprise the boyfriend when he gets back from Kansas City...

If anyone lives out in Kansas City, next time you go to the airport, you might see my boyfriend on one of the video screens...he's leaving today to film it.
Posted by SleightGirl