...But first, here are some of the Friday's Favorites Treasury stats so far: 34 views, 9 clicks and 14 comments. Haven't added your clicks yet? It's not too late. 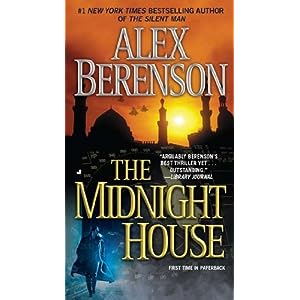 I finished reading The Midnight House by Alex Berenson. Now granted, I haven't read any of the previous books where he was a character, but for the most part, this stood on it's own. However, I hate it when authors start different plots and drop them somewhere in the middle not to be spoken about again.

The main plot itself was interesting and sucked you it, and toward the end I couldn't read it fast enough...partly because I wanted to know what happened next, and partly to find out what he was going to do about one of the plots that happened in the beginning. Needless to say, I was only half satisfied.

George Guidall's no-nonsense tough guy growl adds a sense of hard-boiled reality to this fourth adventure featuring coolly efficient CIA agent John Wells. Working with his considerably more emotional associate, Ellis Shafer, Wells investigates the assassinations of interrogation team members working on a group of jihadists at a secret location known as the Midnight House. Berenson switches from Wells's and Shafer's difficult and perilous search, which takes the former to and from Cairo, to a sequence of flashbacks involving the team members going about their grim job at the House. The result is a clever mix of detective story and spy thriller, with Guidall handling the chronological and genre shifts as smoothly and efficiently as he does the changes in accents.
Posted by SleightGirl