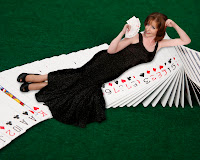 With her head cut off...

Yup that was me, yesterday. I finished the socks, but then the boyfriend wanted me to go and do some errands with him, then my tenant's toilet broke, so we had to go over there to fix it, then I got roped into making stuff for the boat (pun intended), so I never got to photograph them. I was hoping to put them up today, but I don't think that's going to happen before I have to go to work.

In other news, I picked up a gig for Thursday...yay! The College of Southern Nevada is having an end-of-the-year party and I'm going to be part of the entertainment. I have know idea whether I'm performing for professors or students or both...it doesn't change too much of what I do, but it would be nice to know.

Right now I'm having a love/hate relationship with winter. Usually I love the weather, love the cold (yes it gets cold here, just not Canada cold)...but now that I'm on etsy, the daylight is gone when I get home and it cuts down on my picture time...sigh.

Oh, and today's picture is of me...since I haven't taken any new one's of my stuff, I was running out of pictures to show.

Are you having a bad relationship with winter right now? Click here to help ease your pain.
Posted by SleightGirl