I'm so far behind on posting the books I've read... I've read four since my last review, but I'll do the most recent one. 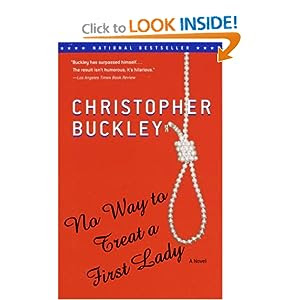 No Way to Treat a First Lady by Christopher Buckley (author of "Thank you for Smoking") was really good. When I started reading it, I was afraid it was going to be a John Grisham-esque courtroom drama book, but it is oh so much more than that. It is hard to make a book so ridiculous and at the same time getting your readers to think that they've seen all of those characters in real life. People were staring at me strangely when at times I would laugh out loud. It's almost the "Waiting for Gufman" of courtroom drama.

Definitely more books by Buckley are going on my wishlist.

The lurid sexual excesses that dominated presidential politics in the late '90s provide plenty of comic fodder for Buckley's latest satire, which doubles as a legal thriller that begins when President Ken MacMann is found dead in bed next to his wife after a vigorous night in a White House guest room with his latest mistress, film star Babette Van Anka. First lady Elizabeth MacMann whose tabloid nickname is Lady Bethmac is first on the suspect list, largely because she bopped Ken with an antique spittoon after his latest infidelity, leaving a bruise that spelled out Paul Revere's name on the late presidential forehead. Beth quickly hires an expensive, successful legal gun named Boyce "Shameless" Baylor, who also happens to be an old flame, and Baylor wades into the sordid mess, using the well-established tactics of tabloid trials to steer his client toward reasonable doubt. But Beth gets cocky after his initial success and insists on taking the stand to clear her reputation, a tactic that backfires so badly that Baylor is forced to resort to jury tampering to try to force a mistrial. Buckley has to use some obvious narrative cliches to get Baylor and MacMann out of the mess after they rekindle their romance, but the good news is that this book is more plot driven than Buckley's earlier satires, making it more coherent and effective over the long haul.
Posted by SleightGirl