Review --When Will There be Good News-- 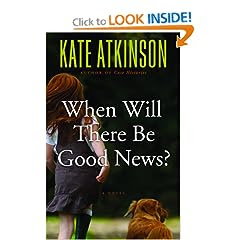 During my hectic week I managed to finish a really wonderful book When Will There Be Good News by Kate Atkinson. I had picked it up at the library because it sounded interesting, but wasn't prepared to love it as much as I did. I didn't even know that one of the characters appears in other books by her, so I must check them out as well.

Everything about it was wonderful. I fell in love with each of the characters, and was actually disappointed when it was over. The plot was compelling (although there were a few coincidences, in there), and it kept me turning the pages. The writing was also wonderful. What could have been a run of the mill thriller, was brilliantly executed, and some of the observations made me giggle (though it wasn't a funny book).

I recommend this book to anyone who enjoys a good story.

Synopsis (which doesn't do the book justice)

On a country road, six-year-old Joanna Mason is the only survivor of a knife attack that leaves her mother and two siblings dead. Thirty years later, after boarding the wrong train in Yorkshire, Brodie is almost killed when the train crashes. He's saved by 16-year-old Regina Reggie Chase, the nanny of Dr. Joanna Hunter, née Mason. In the chaos following the crash, Brodie ends up with the wallet of Andrew Decker, the recently released man convicted of murdering the Mason family. Enter DCI Louise Monroe, Brodie's former love interest, who's tracking Decker because of a recent case involving a similar family and crime. When Dr. Hunter disappears, Reggie is convinced she's been kidnapped and enlists the reluctant Brodie to track her down.
Posted by SleightGirl