Since I've been here, I've finished 3 books and haven't posted any of them...oops...so the next couple posts will be about what I read. 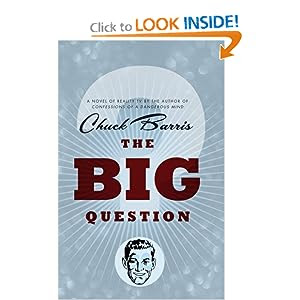 The Big Question by Chuck Barris (yes, the one from the gong show) was just awesome. I love how he gives you such a background on each of the characters that you feel that you know them. Some you are rooting to win, some you are glad when they lose, and in the end...well, you'll have to read it to see.

I have already put a few of his books on my wishlist. Who knew he was so talented?

A retired game-show producer is accosted by a grubby old man, who offers to sell him an idea for a new show. In Barris' near-future world, assisted suicide is legal, and in the proposed new show, contestants either win $100 million or are executed on live television. The novel follows the lives of several potential contestants, including a teenage prostitute, an elderly woman, and an ex-con, but what makes the tale so fascinating--some might say warped--is that the grubby old man is none other than a down-and-out Barris himself. As usual, the author of Confessions of a Dangerous Mind (1982) blurs the line between reality and fantasy, making us wonder just what the heck we're supposed to believe. And, while we're pretty sure Barris never produced a pilot for this particular game show, is it so hard to believe, what with the current state of reality TV, that someone might someday put something like this on the air? A darkly satirical, witty, and uncomfortably plausible novel.
Posted by SleightGirl