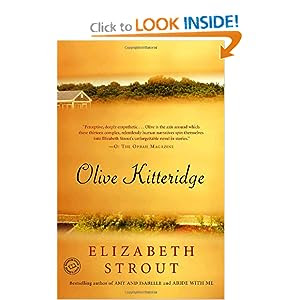 It has been a while since I've read a really fabulous book, and Olive Kittridge by Elizabeth Strout definitely fits the bill. Through a series of stories you find out about this strong yet frustrating lady, and through each person, the author manages to touch your heart. I was very sad when it ended, not because the ending was sad (I won't say whether it was or wasn't), but I'd fallen in love with this book and I wanted it to go on, and on, and on.

“Hell. We’re always alone. Born alone. Die alone,” says Olive Kitteridge, redoubtable seventh-grade math teacher in Crosby, Maine. Anyone who gets in Olive’s way had better watch out, for she crashes unapologetically through life like an emotional storm trooper. She forces her husband, Henry, the town pharmacist, into tactical retreat; and she drives her beloved son, Christopher, across the country and into therapy. But appalling though Olive can be, Strout manages to make her deeply human and even sympathetic, as are all of the characters in this “novel in stories.” Covering a period of 30-odd years, most of the stories (several of which were previously published in the New Yorker and other magazines) feature Olive as their focus, but in some she is bit player or even a footnote while other characters take center stage to sort through their own fears and insecurities. Though loneliness and loss haunt these pages, Strout also supplies gentle humor and a nourishing dose of hope. People are sustained by the rhythms of ordinary life and the natural wonders of coastal Maine, and even Olive is sometimes caught off guard by life’s baffling beauty.

Remember, knits are great to snuggle up with while you read a book...check these out.
Posted by SleightGirl