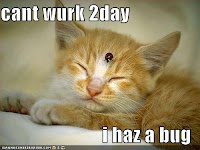 I was so sick for the past 24 hours.  Not cold sick, but flu sick... I don't think it was food poisoning, because the boyfriend wasn't effected. I felt like Linda Blaire in the Exorcist, it was that bad.

All day yesterday, I just lay there, trying to sleep.

Now my back hurts from laying around too much.  How much of a wimp am I when I can hurt myself merely by lying down?

The boyfriend cheered me up when he came home from work. He brought medicine, ginger ale and some new yarn. He's got a really good eye for stuff like that and I can't wait to make something out of it... the yarn, that is, not the ginger ale or the medicine.

I'm doing much better now, though today is going to be playing catch up for all the stuff that was supposed to get done yesterday.

Email ThisBlogThis!Share to TwitterShare to FacebookShare to Pinterest
Labels: life