Well...not really...but I just got a phone call from my photographer asking me if he could use my photo in an advertisement in Magic Magazine. He takes pictures of magicians all over the world, so I feel quite honored that he chose my picture instead of all the famous magicians he's taken pictures of. This, of course, means that now I'm going to have to go out and buy a magazine...I used to read it religiously, but that was because I was working in a magic shop and I could read it for free...but in any case, I feel pretty cool. 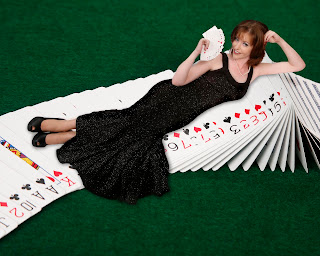 And yes, that's the picture they're using!

Now I'm off to my friend's graduation...after today, she can officially put a "Dr." in front of her name...Doctor of music though, so if I fall down ill in her presence, there's not much she can do.
Posted by SleightGirl