Birthdays, and Scrunchies, and Turkey oh my!

The other day was the boyfriend's birthday. He doesn't really like to make a big deal about it, but I love birthdays, so it's kind of a battle of wills between us. I got him presents which made him mad that I got them for him but happy because he loved them...I got him cake which he said I shouldn't have, but ate it with relish (meaning he enjoyed it, not with pickles)...the one thing I didn't do (because I kind of got lazy) was give him a pie in the face which is apparently what you do to a clown on his birthday...so next year, he better watch out. 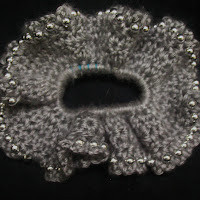 I listed a grey beaded scrunchie last night. It's the same as the pink one only grey. I still have a finished headband to list, but last night I was too tired to measure it...I don't have a big house or anything, but the few feet to the laundry room to grab the tape measure just seemed waaaay too far.

I must have been featured on a Turkish blog. Yesterday I was getting a ton of hits (over 100) and I couldn't figure out where they were coming from. I wasn't featured anywhere and I wasn't in a treasury. Well, this morning when I checked my google analytics, there was this blog that I could see that all the hits were coming from. I didn't understand the language, nor did I even see a picture of anything I'd made.

So then I looked at the map to see where all this activity was coming from, and lo and behold, there was like 95 hits from Turkey! Though around Thanksgiving I do profess my love of Turkey, I haven't really tried to focus any of my advertising on the country itself...how cool is that?

I then looked at content by title and discovered that it was my Lime Green Tank with Gold Accent...Wow! The web is really an amazing thing.
Posted by SleightGirl