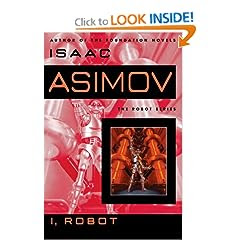 I, Robot by Isaac Asimov was certainly a fascinating read. I haven't seen the movie, but I'm very interested in what they took from the book and what was original to the film.

The boyfriend and I compared notes, him having seen it, me having read it, and they seem like two totally different stories with only the theme of robots being the common thread. What I hear from most people is that if you've seen the movie, the book won't be anything like you'd expect it to be.

I found it a brilliant story (more like a collection of stories) that fuse philosophy and logic to solving problems that a robot could encounter while trying to follow the laws that were programed into it, and reading this, one can see how robots could run the world some day. Though, normally that's a scary thought, in the book, the way it's written, it seems almost comforting...I'm thinking in real life, not so much.

If you are a sci-fi fan, this is a must read...if you are on the fence about sci-fi, or have never read any, then this might be a good one to try out.

With these three, simple directives, Isaac Asimov changed our perception of robots forever when he formulated the laws governing their behavior. In I, Robot, Asimov chronicles the development of the robot through a series of interlinked stories: from its primitive origins in the present to its ultimate perfection in the not-so-distant future--a future in which humanity itself may be rendered obsolete.

Here are stories of robots gone mad, of mind-read robots, and robots with a sense of humor. Of robot politicians, and robots who secretly run the world--all told with the dramatic blend of science fact and science fiction that has become Asmiov's trademark.

Bess (the doggie) made it into another treasury! Give a click or two, please, if you have the time.