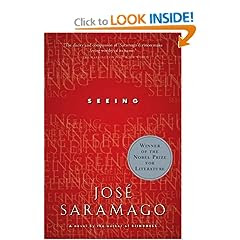 I read the book, "Blindness" quite a while ago and LOVED it so much (better than the movie I hear), that I could not wait to read Seeing by Jose Saramago. It's sort of the sequel, to the first...but as we know, sequels are rarely as good as the original.

This book was OK. There was a lot that might not make sense had you not read the first one, but all in all it was lacking.

I still love his writing style, which is very different from any that I've read, but the story itself, while it started off very promising, kind of fell flat towards the middle and then the ending seemed like a cheep way out.

I highly recommend "Blindness", but as far as "Seeing" you could probably let it pass you by and your life wouldn't be the worse for it.

In "Seeing," some 70 percent of the residents of the capital of an unnamed country turn in blank ballots in an election, refusing to vote for the Party of the Right, the Party of the Center, or the Party of the Left. The government, dominated by unsavory and unprincipled authoritarians, is horrified that the rituals of democracy have generated a challenge to the government's legitimacy and orders the election to be reheld. But the percentage of blank votes is higher than before.

The government's reaction, though often fumbling, is vicious and lethal. It uses various Orwellian techniques and, as it deems necessary, violence to punish the capital's residents and try to get them to appear to respect the available choices, regardless of their true feelings about the three parties.
Posted by SleightGirl