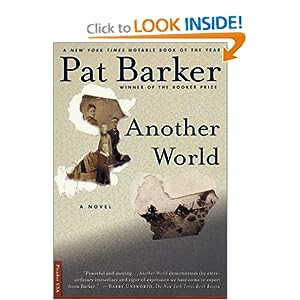 Yesterday I finished reading Another World by Pat Barker. There were some really cool elements in the story, and some, not so cool. The characters were great, and really well thought out, and the main story was both interesting and heartbreaking. There were other stories going on in the periphery that seemed to start the reader down a line and then were barely mentioned again. I was left wanting to know what happened with those stories after the main one was resolved. I don't know if this is a "must read", but if you do pick it up, it will definitely draw you in.

Geordie, a WWI veteran, is over 100, but is hanging on to life with the same stubbornness and iconoclasm that have seen him through the entire 20th century. His grandson, Nick, living in grim, contemporary Newcastle-on-Tyne, is struggling with his own life as he monitors Geordie's last days. Nick's teenage daughter from a previous marriage, Miranda, has come to stay; his new wife, Fran, with her own kid, Gareth, a computer games freak, has two-year-old Jasper to contend with and another baby on the way. Now it seems that their new house may be haunted by the kind of malign domestic spirit at large among Nick's little family. Geordie, too, has his own ghostsAa hideous war memory, long buried, that must be exorcised before he can die in peace.
Posted by SleightGirl