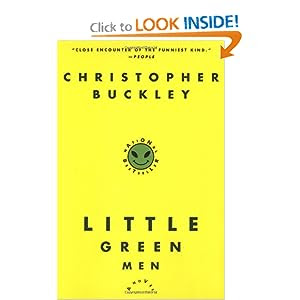 It's been a while since I've done a book review, but my reading is kinda outpacing my blogging... but anyway, here's the latest.

On Thursday, I finished reading Little Green Men by Christopher Buckley. I do enjoy him as an author, and how his over the top writing, paints a funny satire of our society.

But even if you're not into commentary on life, the story does stand up on it's own. It made me think that even as ridiculous as it sounds, I could see something like this going on. And though it sounds like a Sci-Fi book, in my opinion, it isn't one. Just a funny and interesting novel.

In Christopher Buckley's hilarious fourth novel, Washington, D.C., is naturally enough a place of sex, lies, and videotape. Unfortunately for Little Green Men's pundit protagonist, John Oliver Banion, it is also the HQ of Majestic Twelve, a very, very covert government project. Since "that golden Cold War summer of 1947," MJ-12 has had a single mission--to convince taxpayers that space invaders are constantly lurking below what's left of the ozone layer. "A country convinced that little green men were hovering over the rooftops was inclined to vote yea for big weapons and space programs," the author thoughtfully explains.

But one disgruntled operative wants out. Nathan Scrubbs is fed up to the back teeth with the art of alien abduction--not to mention his cover as a Social Security flunky--so when his request for a transfer is quashed, he drunkenly decides to take it out on ubiquitous ultra-prig Banion, who happens to be on TV at the time. The ensuing high-tech kidnap, at Maryland's Burning Bush Country Club, is only one of the thousands of convulsively funny scenes in Little Green Men.
Posted by SleightGirl