Rain? But it's a Desert! 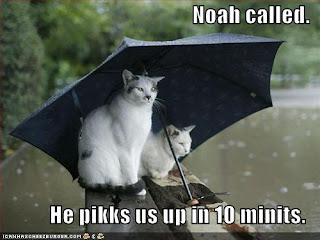 Last night I was performing magic at one of the new centers out in the northwest of town. It's an outdoor venue which I've been working at for the last couple of months. As they are new, they are providing free entertainment to encourage customers to come and see the new shops. These include caricature artists, balloon twisters, jugglers, magicians, face painters and even a different band every night.

Well, last night, the clouds opened and sheets of rain began to fall. There's not that much shelter in the place so everyone was huddled together, and I was doing my best to keep people entertained until it let up. First it poured for 5 minutes, then cleared, then another 10, then cleared and after the third time, they let us off work early as they figured it was impossible to perform.

The band had it the worst of all, since they had a lot of electrical equipment, and even though they had a tent over their heads, the wind was actually blowing the rain straight at them.

I love the rain, especially since we see so little of it here, and it was nice to leave work a little early.

Yesterday's To B or Not To B treasury, so far has 88 views, 24 comments, 41 clicks and 3 favorites! If you haven't taken a look, please check it out.
Posted by SleightGirl