Well, first things first...Still don't know about the boat. The people down at the lake said nothing much happened out at "Q" dock, but no one could go out there until yesterday afternoon. Both me and the boyfriend had gigs, so he'll probably go and check on everything after work...keep those fingers crossed. I really don't know if I could handle the bouts of depression that could incur if there is more damage than a little dirt...a little dirt we can handle. 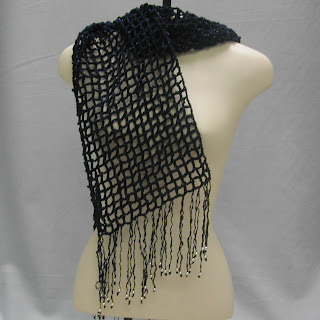 In Recycle news!
I finished my first upcycle/recycle project and put it up on etsy. It's a Blue Sparkly Wrap with fringe and beads...I really shouldn't be as excited as I am about the beads, but I've never put them on a project before...they added a nice weight to the fringe.

It was really hard to show the sparkle of the yarn in the photo...I can see it, but I know it's there...I might have to do some more shots of it soon.

I had a bunch of yarn left over, so I'm making a shawl in the same sort of vein. I doubt I'll finish it today, but hopefully by the end of the weekend I'll have something to show for it.

Don't forget to tune in tomorrow for the "Sunday Funday" video!
Posted by SleightGirl