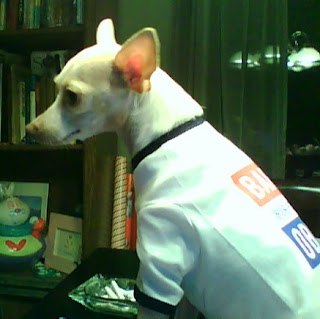 I thought my first special would at least generate some interest, but so far, not so much...I guess I'm going to have to be more creative next Saturday.

My doggie sweater is almost done! I just have to finish the belt...it's going to look like a Santa Sweater when it's done. The boyfriend thinks it's funny, but I think it's cute...and most guys don't really like to dress up Chihuahuas anyway...and yes, that's her in the picture sporting her Obama shirt...she's quite the model.

I also started on some super warm christmas house socks...the cuffs are almost done and I'm hoping to be finished with them in a couple of days. Sometimes it's really hard to list stuff on etsy because once it's made, I want to keep it! But really, I have so many things that I made, that I just suck it up and try to send them out into the world.

Shopping anyone?
Posted by SleightGirl