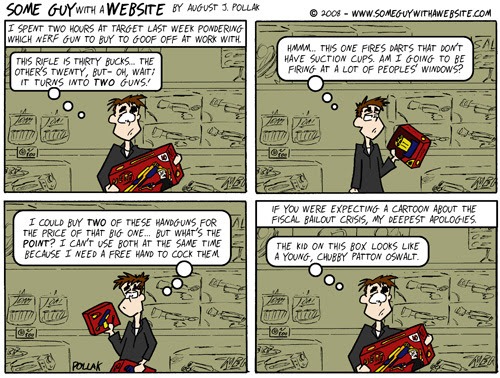 It's always a dangerous thing for my boyfriend and I to go into a thrift store...so of course that's what we did last night. He was looking for a new water gun for the scooter and I was looking for a new sweater to take apart...I was successful, and he wasn't (don't worry he found one at Walmart later on)...

He did find one of those 10 shooter nerf guns though...this was the dangerous part. He already had the velcro nerf bullets at home, so he started playing with it immediately. We noticed that the bullets stuck really well to a chair, so with a little bit of painters tape, we had a target and the game was on.

After a while, I remembered I had a very large granny square I'd made for the dog. I ran off to get it and then we had an even better target. We kept making up new games and point systems and played until one in the morning...now he wants me to crochet a better target...I will, but after I finish the jacket that's still not done.

My hands are sore from all the shooting, but boy was it fun!
Posted by SleightGirl