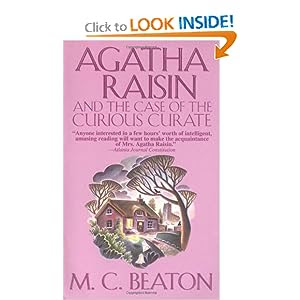 I finished reading a book called Agatha Raisin and the Curious Curate by M.C. Beaton. It was a fun little detective novel, although the ending kind of came out of nowhere. It was, however, entertaining. It is one of a whole series of detective novels.

Usually I tend to like these types of mysteries when it's the police investigating, not an amature. I'd probably tend to enjoy the characters more having read more books in the series, but I think I'm going to read something else next instead, and perhaps come back to this one later.

At the core of every village cozy is a pinch of arsenic. In the Agatha Raisin Cotswold cozies, the arsenic is Agatha herself, a pushy, whiny, unsociable, self-pitying sort who investigates murders in the tiny village of Carsely the way other women might shop, as a distraction from boredom. Despite Agatha, this series, now in its thirteenth outing, is very popular. In the latest, the village is shaken by the appearance of a gorgeous new assistant cleric. Before long, the cleric is hated by the vicar for pulling in record crowds at services and lusted after by every woman in the village. After the cleric is found stabbed to death at the vicarage, Agatha takes it upon herself to discover who did in the body in the library.
Posted by SleightGirl