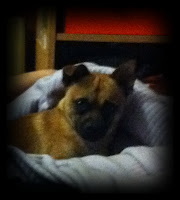 Last night the boyfriend and I adopted a new doggie from the pound. We're not quite sure what kind he is, but we're pretty sure there's some pug in him. Bess, my chihuahua, doesn't usually get along with other dogs, so we brought her to the pound too, before adopting, so that she could have the final say.

They got along, and last night with all four of us in the bed, there was no growling or arguements...(Bess can be a bit possesive of the bed), so we're considering that as a success. 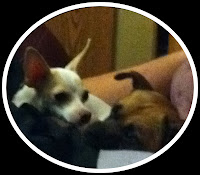 We named him Gibbs... Yes, we're both NCIS fans. I wanted to name him Harry to go along with Bess Houdini, but the boyfriend nixed the idea, so Gibbs it is. Can't change it now anyway, it's on his microchip.
Posted by SleightGirl