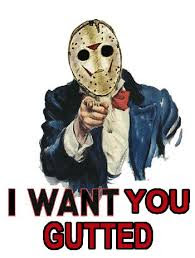 I'd like to start off by saying that I don't believe that Friday the Thirteenth (yes I capitalized it) has any more significance than Thursday the twelfth...that said, yesterday was a very unlucky day for me.

It started when I left the house for work...I noticed some glass in the parking lot and realized that my boyfriends car had been broken into. They took the radio (it wasn't even a good radio). I could possibly understand this if he had a state of the art sound system, or lots of cool stuff lying on his front seat, but it wasn't and there wasn't...on his front seat was a lot of fast food wrappers, a true sign that there was something worth money in there (yes that was sarcasm). So he spent his day off getting his window fixed.

Then I get to the show and management had messed up the schedule, so I was stuck doing a dancing role (yes, I used to be a dancer, but the key words are "used to" and now I'm extremely out of shape). So by the time I was done I was so exhausted, I crashed on the couch and didn't get anything done the rest of the evening.

I know there should be a third thing...these things always seem to happen in threes, but that was it.

In my opinion, this would have normally been just a bad day, but since it fell on the infamous date...well...now I have something supernatural to blame...is that supposed to make me feel better or something?

Click over here to make Saturday the Fourteenth (yes I capitalized again) an extremely lucky day for me...lol
Posted by SleightGirl